Back to overview
Netherlands - Germany

Gentle cycling along a majestic river

Natural beauty of the Hoge Veluwe

During this cycling holiday through the Netherlands and Germany, you will follow the Rhine river from Amsterdam to Koblenz. You will see and feel the rich history of this majestic river, from Roman times to the Industrial Revolution, and from WWII to German reunification.

In the Netherlands you will cycle through flat, peaceful, farming countryside and ride through the Hoge Veluwe National Park with its abundant scenic beauty.

Later on, in Germany, you follow the Rhine upstream, through cities like Remagen and Bonn. Next stop is Cologne, once one of the most important centers of the Holy Roman Empire. Cologne’s landmark is, of course, its monumental Dom cathedral, situated right next to the city’s central station and railway bridge across the Rhine.

During the second half of this trip you follow a more romantic section of the Rhine valley, with strongholds, mansions and the first vineyards appearing on the hills. The tour ends in Koblenz, a lively and interesting city, where the Rhine and the Mosel converge. 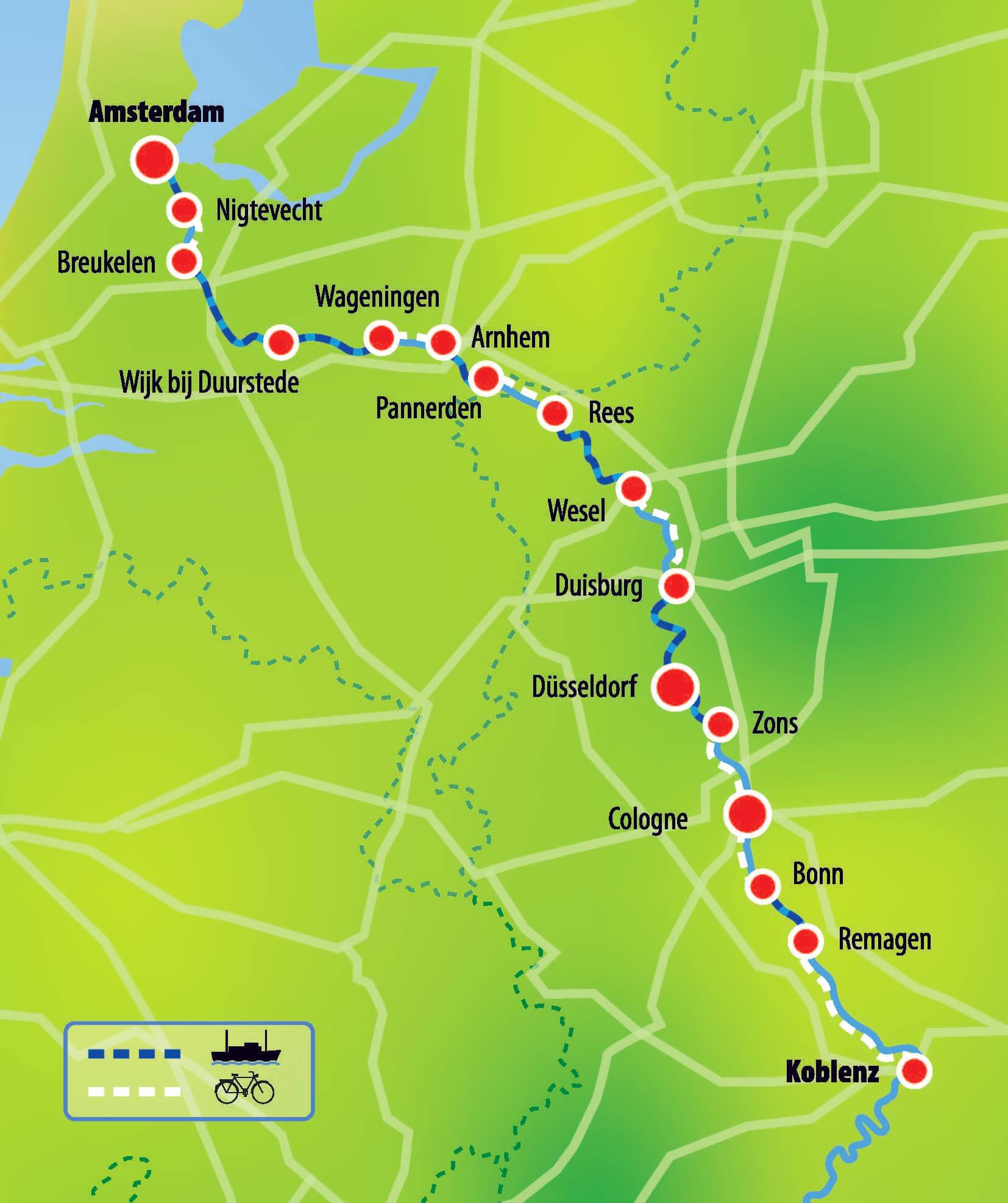 Click to zoom
Preparation is half the fun, so why not start straight away?
See all tips

Parts that are printed in italics parts will be covered by the ship.

All distances are “approximate distances” of recommended bike tours.
The tour details are barring changes, a.o. as a result of nautical, technical or meteorological reasons.

Embarkation in Amsterdam is at 12.30 p.m. Please be sure to arrive on time!

Following a welcome meeting with the crew, the barge will depart immediately for Nigtevecht. Here you will set out on a short test-ride to Breukelen, after which Brooklyn in New York is named. You will enjoy the Dutch countryside and the meandering river Vecht. Dinner is served while sailing on the Amsterdam – Rhine Canal. The ship brings us to dock at Wijk bij Duurstede; one of the oldest settlements in the lowlands.

Enjoy breakfast while sailing. Today we cycle from Wageningen through the Hoge Veluwe National Park, with a visit to the Kröller-Müller museum.
The museum is a cultural heritage site founded at the start of the twentieth century by Anton and Helene Kröller-Müller. Anton was a successful businessman who enjoyed hunting with business associates and friends, so he purchased the Hoge Veluwe, in several phases from 1909, as a hunting ground. Helene was an enthusiastic art collector. Anton and Helene had a dream: to bring nature and culture together. Between 1909-23 they laid the foundations for today’s national park, and started construction of a museum for their art collection.
In 1935 the park was placed in a foundation: The Hoge Veluwe National Park. The foundation received a loan from the Dutch government, and the art collection was donated to the State of the Netherlands, which completed the museum. Today the Kröller-Müller Museum features a world-famous collection of mainly 19th and 20th century art. Central to the extensive collection are many works by Vincent van Gogh.
Today’s ride has some elevation (by Dutch standards) and we cycle through abundant forest. In the afternoon we ride to Arnhem where we meet the barge. After dinner you can join a walking tour of Arnhem.

Sail through Dutch countryside during breakfast, then start the day’s cycling from Pannerden. Before reaching the German border, we pass Doornenburg with its wonderfully maintained medieval stronghold. This fairytale castle has provided the location for many a movie. From Doornenburg you take the right bank of the Rhine and pass the border at Lobith. En route to our destination of Rees, you pass Emmerich, a larger town boasting a lovely boulevard along the Rhine. We end the day in Rees, with its impressive fortification remains.

The barge departs early this morning and over breakfast we sail to Wesel, where we disembark.
Today we focus on the Ruhr area where Germany, and possibly Europe’s, largest industries are located. Cities like Essen, Duisburg, Oberhausen and Dortmund are intertwined together through a maze of highways, railways and waterways. This region was once very prosperous and therefore a target in 1923, when French and Belgian troops tried to occupy it to enforce Prussia’s WWI reparation payments. From 1944-45 the Ruhr was also a top target for the Allies. After so much conflict and industry it’s hard to imagine that you can cycle here, but you can! The German government put a lot of effort into redeveloping the area after the closure of many factories. It may not be always scenic, but it is an impressive and evolving post-industrial landscape not to be missed when visiting the Rhine. However, as we don’t want to cycle too long past factories, the ship picks us up at Duisburg and takes us on to Düsseldorf. We dine while sailing.
In the evening there is time to visit the Altstadt, where you can try the famous local dark beer, Altbier. You will be amazed what an international city Düsseldorf is, with foreigners comprising almost a fifth of the population.

During breakfast we cruise to the old town of Zons. We leave the Ruhr behind as we cycle towards Cologne. Today we follow the Rhine closely in order to arrive in Cologne early enough for some afternoon exploring. Founded by the Romans, Cologne is the oldest of Germany’s larger cities. In 50 AD it was already granted the status of ‘city’ as a gift from the Roman empress Agrippina. Later, Cologne became one of the most important centers of the Holy Roman Empire. Its landmark is, of course, the Dom cathedral, located right next to the central station and railway bridge crossing the Rhine. Construction on the cathedral began in 1248 and was only completed in 1880! The city was almost completely destroyed in Allied bombings of 1944-1945. The city hall however, dating from 1330, has been beautifully restored.

Today we again follow the river by bike in order to reach Bonn in time to visit West Germany’s capital from 1945 until 1990. Berlin was re-established as capital after Germany’s reunification, but Bonn continues to house six governmental departments. Like Cologne, Bonn was founded by the Romans, around the year 10 BC, as it was a good site to bridge the Rhine. Worth visiting are the old City Hall, the Münster Basilica, and the house where Beethoven was born. After dinner you can join a city walk through Bonn.

During breakfast we sail to Remagen. Your cycling tour starts here, but first there’s time to explore this town’s rich historical past. Nowadays it is best known for its once-famous Ludendorff Bridge, the only functional Rhine bridge captured by Americans in Operation Lumberjack in March 1945. The bridgehead houses a museum dedicated to its history. After Remagen, a more romantic section of the Rhine valley begins with strongholds, mansions and the first vineyards at the foothills of central Germany. We pass the beloved bathing resort of Bad Breisig and also Burg Rheineck. This stronghold, set in stunning scenery, dates back to 1100. We visit Andernach, once a Roman settlement. It is still a wonderful town with many historical sites. Shortly after Andernach we arrive in Koblenz. Its name comes from the Latin confluentes, meaning the merging of two rivers (the Rhine and Moselle). The statue of Emperor Wilhelm of Prussia at the intersection of the two rivers is an impressive landmark. Koblenz is a city cozily rebuilt after the damages of the Second World War.

The end of your tour: Enjoy one final breakfast and disembark by 9.30 a.m.

The price of a charter depends on many things. The beauty of the tours that we offer is that they are fully customizable. We can add extra services such as special bikes, extra meals or we can organize visits to the highlights of the region where you cycle that are not included in the program. That all affects the price. You can request a quote here for a trip of your choice. Our team of specialists will assist you to choose the right ship and itinerary or design a customized program for you.

Included in this tour

Coffee and tea on board

Use of bed linen and towels

Daily cleaning of the cabin

Use of a waterproof pannier bag

Excluded in this tour

Gratuities (at your discretion)

Available ships for this tour

Storage space under the beds

The Flora is a cozy and comfortable passenger barge for around 20 people. All of the 10 cabins have two single beds with the necessary facilities and enough space to store your belongings. In 2 of the cabins there is a foldaway bed for children up to 12 available on request. The nostalgically furnished salon has a bar, a nice living room and restaurant section where you will be served tasty food. Enjoy the scenery on the sundeck while cruising or when the Flora is moored in one of the picturesque harbors.

Bicycles/E-Bikes:
On board are bicycles of the brand Trek X300 with easy-to-handle Shimano 24-speed gears, handbrakes, gel-saddle (height adjustable), a lock on the frame and a pannier bag. All bikes have 28 inch wheels.
For large gentlemen (from 1.90m and above) we have a few traditional men’s models (with a horizontal bar) available.
The e-bike is a Trek TM2+ with 9 gears, 3 support levels and hand breaks only (or a comparable brand/model).

Bike rental is optional. Guests are also allowed to bring their own bicycles (at no additional fee), but only after they have been previously registered and confirmed. There is a maximum of 6 own bicycles per departure. However, the crew or tour operators are in no way responsible for any damage, loss or theft of guests own bicycles.
Prices of other bikes (e.g. children’s bikes, “slip streamers”/tag-a-long, tandem bicycles etc. and child’s saddles (rear) are on request.

The Allure started cruising in 1998 and after a restyling the barge with its sleek lines was turned into a comfortable and friendly passenger barge. From that moment on, the Allure has been successfully hosting boat and bike tours in the Netherlands, Belgium and Germany. In all of the ten comfortable cabins you’ll find two twins or a double, and a private bathroom. And in the afternoon and evening you are more than welcome relax in the cozy lounge, but let’s not forget about the three course dinner you can enjoy in the restaurant each night.

Bicycles/E-Bikes:
The bicycles on board are touring/trekking bikes of the brand Velo de Ville with 7 speed and handbrakes, a lock and pannier bag.

Tours in Holland: E-Bikes: The e-bike is a Velo de Ville CEB 200 with Nexus 7 gears, 4 support levels and hand breaks only (or a comparable brand/model). E-bikes available (on request, limited stock, pending availability). Other bikes (e.g. e-Bikes, children’s bikes, “tag-a-longs”, tandems, child trailer etc.) and child’s seats (rear) are available after prior request (at time of booking) and after confirmation.
Tours in Germany: Only a very limited amount of E-bikes is available on these tours. Special bicycles (e.g. children’s bicycles, tandems, etc.) are not available in this area and cannot be ordered for these tours. Due to limited space on deck guests can’t bring their own bicycles or E-bikes. This is only possible in exceptional cases when you need a special bicycle or tandem. 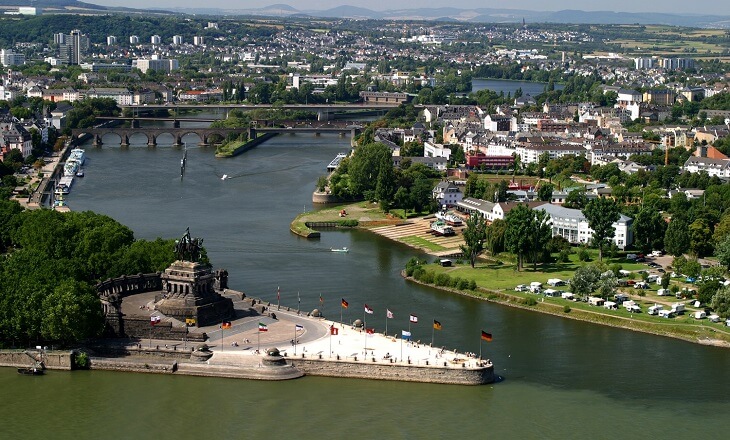 Duration of the tour.
8 days
Guidance 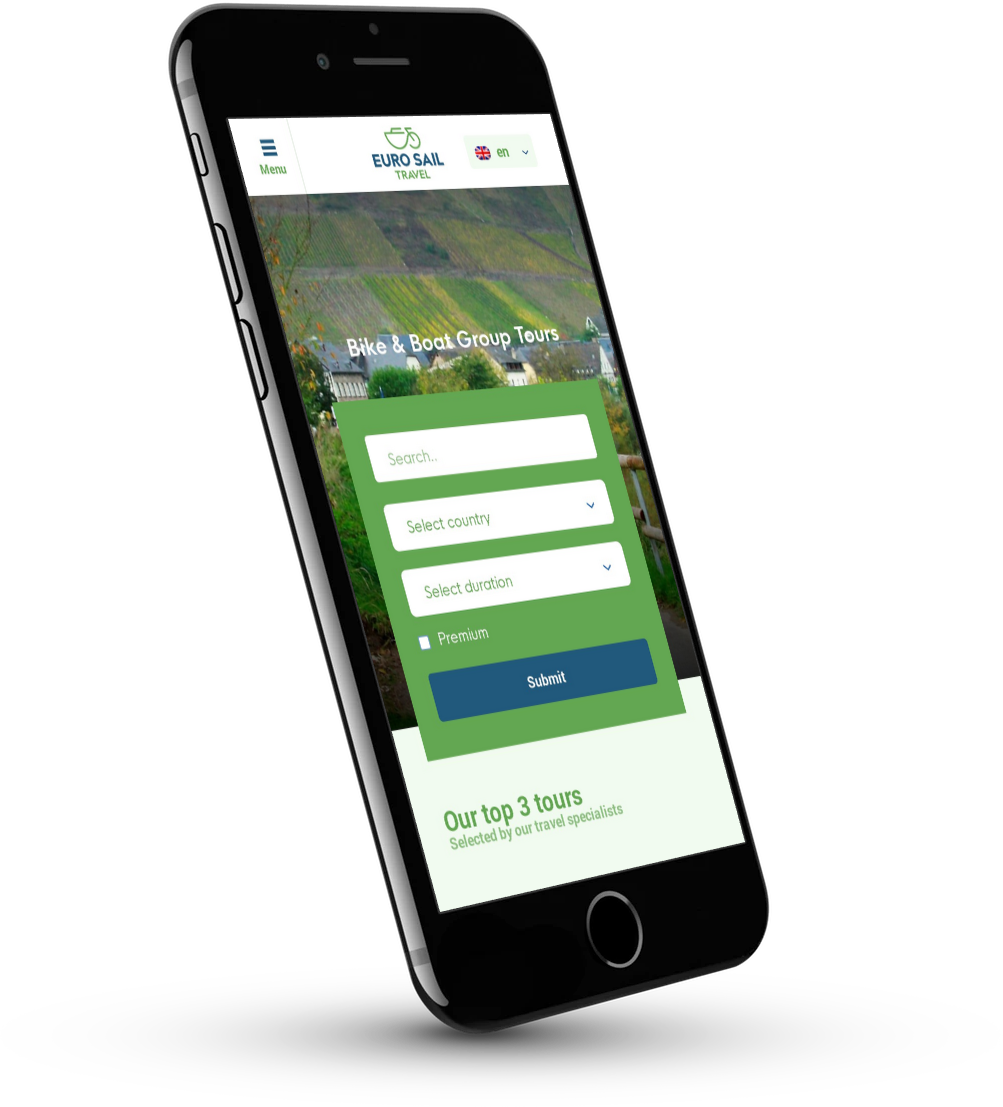 Receive new tours and travelling inspiration directly into your inbox Curated by our travelling agents and highly trained and experienced guides, just for you.
Select what to print:
Day to day program
Ships
Print